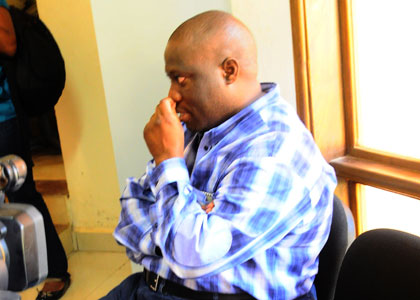 Kazinda’s hopes of getting temporary freedom have been shuttered.

Geoffery Kazinda who is on remand at Luzira prisons on charges of embezzlement and forgery had applied for bail on account of poor health and that bail is constitutional right.

However, the judge has said that Kazinda could not be granted bail because he is most likely to violate the set conditions given his current confusing medical status.

He cited the two conflicting medical reports from Mulago hospital and Luzira Prison; one indicating that he was fit to stand trial while the other indicted otherwise.

The judge says that it is not possible that the two reports could have conflicting results yet the medical examinations were carried out the same day.

He has decided to send him back to prison and instead speed up the trial.

Separately, Kazinda’s trial at the Anti-Corruption Court has been adjourned to 14th February for further hearing.

This is after the lead prosecutor Jane Francis Abodo told court that she still had four more witnesses including the permanent secretary Pius Bigirimana.