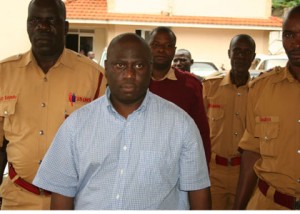 The Constitutional court has dismissed with costs the petition filed by Godfrey Kazinda challenging his trial in lower courts.

The Interdicted Principal Accountant in the Office of the Prime Minister  had asked the Constitutional Court to quash all criminal charges against him and release him unconditionally.

Kazinda faces 29 counts of forgery and causing financial loss to government of Uganda.

In his petition filed in November 2012, Kazinda had sought a declaration that his piecemeal trial in separate courts ‘was not only unconstitutional but tantamounted to selective prosecution.

He also argued that section 11 of the Anti-Corruption Act under which he is charged with abuse of office is in contravention of article 28 of the Constitution.

Kazinda thus wanted to be released unconditionally because he was previously granted bail by the Anti-Corruption court.

However, the three Constitutional Court justices led by Justice Steven Kavuma have quashed Kazinda’s petition on grounds that he did not give evidence that he had been denied the right to fair hearing.

In their ruling read by the Registrar Erias Kisauzi, the judges state that Kazinda also failed to explain to court how he had been subjected to selective prosecution.

They have now ordered that the trial continues at the Anti- Corruption where a handwriting expert waits to present his evidence this morning.

Kazinda earlier filed an application before the Anti-Corruption court chief magistrate Irene Akankwasa seeking to halt the hearing of the said cases until his earlier petition is disposed of, but it was over ruled.