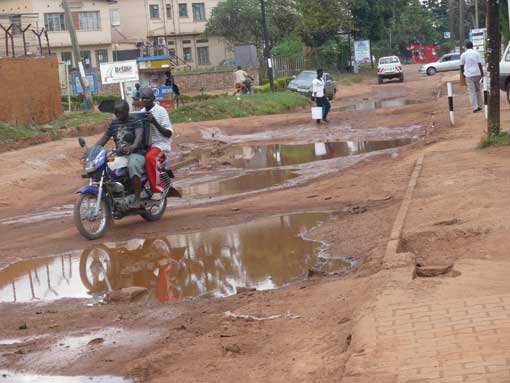 Kampala Capital City Authority says it needs annual funding of Shs 200 billion for 5 consecutive years, to fully transform the city roads.
Addressing the media this morning, the city Director of Engineering and Works Eng. Andrew Kitaka says the available funding only amounts to 20% of what is required and cannot do much.
Eng. Kitaka says most of the roads in the city need total overhaul, which requires more funding.
KCCA however says it is to begin works on some roads especially in the Central business district, with some being patched up while others will be constructed afresh.
The roads which will be fixed first include Ben Kiwanuka Street, Button Street, 6th Street in Industrial area and the roads around the taxi parks among others.
Meanwhile, the city authority has contracted over 500 men and women who are tasked with clearing the city drainage system of garbage.
Eng. Andrew Kitaka says the drainage system would be effective in some parts of the city if it wasn’t blocked by garbage.
The steps being undertaken are expected to make transport in the city bearable as the rains, usually marked with heavy flooding set in.