KCCA’s George Agaba back to jail 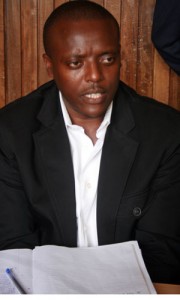 This is after the prosecution informed court that investigations into the matter are in final stages.

Agaba appeared together with his body guard Satos Macmot before Nakawa Court Grade one Magistrate Gladys Kamasanyu for mention of the case.

George Agaba and his co-accused are alleged to have shot dead one John Onyango on 22nd January at Luzira port bell during a KCCA eviction exercise that turned bloody.