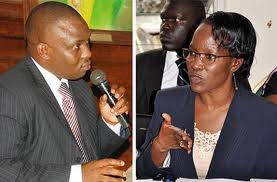 The Kampala City Executive Director Jennipher Musisi has today presented her accountability of the money spent this financial year, raising queries in the council meeting.
First to be queried was her continuous referral to 3 different budgets, failing to give council direction on which is the authentic one.
The first budget involved 176 billion shs, the second one 145 b shillings and the 3rd 155 billion Shs, none of which was signed by the Lord Mayor as required by law.
The Lord Mayor Erias Lukwago has also questioned the reported expenditure of 45 billion Shs on the Fairway Hotel roundabout, questioning how the money was spent since it was already in good shape.

The council has also raised queries on the actual amount of money left on the various KCC accounts by the previous administration.
The Executive Director reported a figure of 52 b Shs while the budget framework reports 58 b Shs, leaving members questioning the whereabouts of 6 b Shs.
The Lord Mayor has also questioned the expenditure of 9.6 b shs, part of the youth fund, which was meant to support agricultural activities.
The Executive Director says the projects have kicked off while members say they are not aware of the existence of such projects.
Meanwhile, the council meeting almost turned chaotic as a section of the councilors tried to block the Kampala Central MP Mohammed Nsereko from contributing.
The Lord Mayor later calmed the councilors down as he explained that MPs are ex-officios who can contribute but are not allowed to vote.

The council has also directed that the District Land Board that was closed on the orders on the Executive Director be re-opened until a pending court case on its operations has been resolved.

Ugandan at helm of Tullow Oil