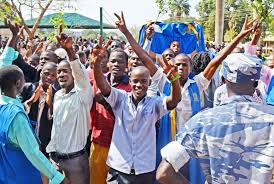 A group of Kyambogo university students have stormed Jinja Road police station demanding the release of one of their colleagues who was arrested in relation to Monday’s stabbing incident.

Gerald Mugabi was this morning arrested in relation to the stabbing of Hamidu Muambe, a first year student at the university.

Meanwhile , FDC president Maj. Gen. Mugisha Muntu says they are going to monitor the situation in Kyambogo to ensure that there is no outside interference in the students’ guild elections so that the students can have free and fair elections.

Muntu and Western Youth MP Gerald Karuhanga were the first political figures to rush to Jinja Road Police station where a group of 20 Kyambogo University students were demanding the release of their colleague Gilbert Mugabi who was arrested for Monday’s stabbing incident.

Muntu says the police have assured them that the student will be released within the next few hours and that some police officers from Jinja Road Police station have been sent to the university to beef up security.