The elections are now turning chaotic in different parts of Kampala and Wakiso due to an overwhelmingly delayed deployment of voting materials countrywide.

At Kanga polling station in Entebbe municipality voting has not kicked off due to late delivery of voting materials.
At Kajjansi dispensary B, polling materials arrived in an NRM candidate’s car causing suspicion.
Police fired in the air to disperse crowds that pounced on councilor Mubiru Balwana.
The voters accused the councilors of ballot stuffing in favor of parliamentary candidate Peter Sematimba.

At Bulaga Mityana road, anti-riot police has been deployed to quell a strike started by voters.
The voters had chosen to sit in the middle of the road demanding that the voting exercise kicks off.
Police has deployed mamba and teargas trucks to calm the situation.
In Makindye Mubarak , a strike is also under way.

Police has heavily deployed at queen’s way where voters turned rowdy over delays in delivery of polling materials.

A scuffle earlier on ensued in Kisenyi after the polling agents disagreed with polling officials on the distance they are meant to keep from the cordoned off area. 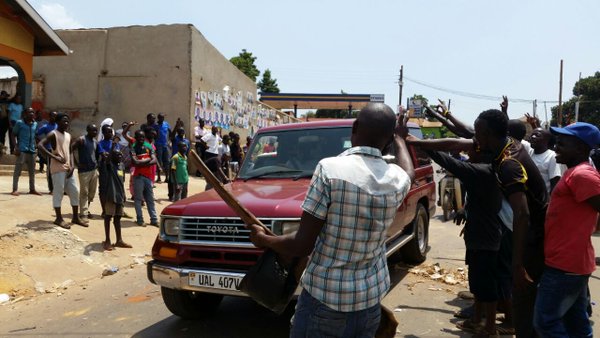 All vehicles have been blocked except and ambulance that passed a few moments ago.

Kyagulanyi runs to High court over his vehicle

Former presidential candidate and NUP president Robert Kyagulanyi Ssentamu has run to the High court seeking a permanent injunction against  the continued threats by the commissioner...

Schools have reported low turn up as they open for semi candidate classes. Buyende District Education Officer Dison Bwire said most schools waited for students and...