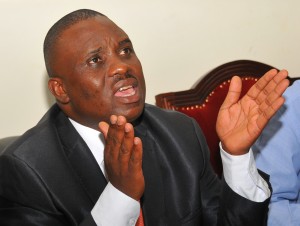 City Lord Mayor Erias Lukwago has summoned his deputy Sulaiman Kidandala over reports that he held a meeting with the inspector general of police.

Yesterday Kidandala refuted allegations that he solicited for a bribe fromGen Kaihura Kale  in a bid to oust Lukwago from office.

In the leaked recordings, a man purported to be Kidandala along with another unidentified man were discussing the political situation at KCCA with General Kaihura.

The unidentified man goes on to ask for money to help in containing the situation at the city hall.

However, speaking to journalists at his home in Wakaliga, Lukwago said that he has been greatly disturbed by the allegations of bribery brought against his Deputy.

He says government should also give its side of the story since its officials are involved in the recordings.

By Cleopus Tukamarwa At least four inmates from Kakondo Prison in Lyantonde District have died and about eight others sustained severe injuries following an accident that occurred...

By Moses NDHAYE Government has warned bodaboda cyclists who do not want to get vaccinated that their days in the city are numbered. The State Minister...

By Ritah Kemigisa The Minister of Health Dr Jane Ruth Aceng has called for calm among Ugandans after scientists in the country today confirmed seven cases...

By Ritah Kemigisa The Deputy Speaker, Anita Among, has directed the government to ensure that demands made by doctors, who are currently on strike, are met....

10% of learners failed to return to schools-Uneb

By Damali Mukhaye The Uganda National Examination Board has revealed that a number of learners in both primary and secondary schools did not return for studies...