Kickboxing: Tonight MTN Arena will be on fire as Golola Moses faces Titus Tugume in a rematch of their September 2013 kickboxing bout. The kickboxers have each vowed to take the Shs20m, but talk is cheap, let’s go see some action, Isaac Ssejjombwe writes.

This is not going to be a love affair as Golola would say but rather a revenge match for Titus Tugume against a man who knocked him out in a record 15 seconds in September 2013. Tonight’s match is highly anticipated both for the competitors and the public as it is one with a motive. 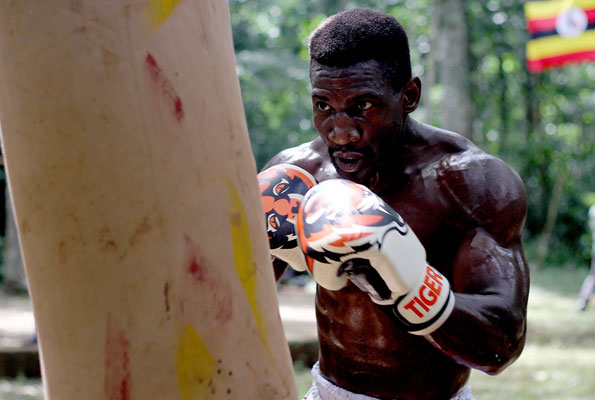 The two fighters will be challenging for the East and Central Africa best of the best championship belt in a seven-round bout where the winner will walk away with Shs20m.

For Golola, it is all about silencing Tugume and stamp his authority as the undisputed champion of Uganda’s kickboxing. Tugume, on the other hand, wants to prove that Golola’s knockout was just a lucky punch. So come Sunday, which is also Valentine’s Day, all roads will lead to MTN Arena for the much-awaited rematch.

Known for his hilarious personality and dramatics, Golola did not have any pleasant words for Tugume when he cautioned the army fighter to come with a letter from the commander-in-chief, Yoweri Museveni, authorising him (Tugume) to fight.

“Tugume should not forget to come with a letter… otherwise the President might accuse me of reducing the number of soldiers in the army”.

Being a man with few words, Tugume said, “He (Golola) was lucky with the first victory, but I am now prepared to show him fire”.

Besides the main bout, the Suudi-organised event, will also seee kickboxers Sharif Bukenya take on Rocky Dento in a non-title match while clubs Hard Body Ntinda and K.I.U Luweero will face off too.
About the match

Security chiefs and media owners form committee ahead of 2021 polls