STARTED FROM THE BOTTOM: Getting where she is has not been a walk in the park but rather a long and arduous climb from the bottom of the local radio industry, conquered by enduring passion. She spoke to Joseph Ssemutooke about her radio journey.

Who is Jaq Deweyi?
She is a radio presenter, singer, songwriter, TEDex speaker, Hepatitis B ambassador, Battle Tunes ambassador for Uganda, and columnist in Heart to Heart magazine, which runs in the Daily Monitor every Thursday, among many other things.

And how would you describe your character?
I am a happy person who loves life and is always talking. I also think of myself as very hardworking. I always get whatever I want by working so hard till I attain it. And I am full of love for people of all kinds.

Talking of working your way to your desires, take us back to when you first got behind a microphone to present the biggest breakfast show on radio today.
I first got on air back in 2010 at Bob FM. I had joined Mubs to pursue a degree in Procurement and Logistics, but it was not what I really wanted to do in life. After one year, I found it very boring. I dropped out to pursue my dream of becoming a radio presenter.
I walked into Bob FM offices and asked for an opportunity, and they gave me an after-midnight show, which I happily took on because I really wanted to be on air. While I learned the practical side, I enrolled at UMCAT for a Diploma in Journalism, majoring in broadcasting.

I still can’t figure out how someone on an after-midnight show grew to earn herself a spot on a breakfast show.
From the start, my gift and work ethic were quickly recognised and rewarded. After about four months, I was moved from the after-midnight spot to one of the prime weekend shows. Then, after about three months, I was moved to the daily evening Drive Show, which was one of the radio’s biggest shows. And when I had been at the station for about a year, I began to look for bigger opportunities at more popular radio stations.

I can see you pushing the doors open at KFM.
No, not yet! First, I went to Touch FM where they wanted someone to sit in for their female breakfast show host who was going on maternity leave. I sat in for three months, after which they wanted me to stay but on another show. But I was already aiming higher and I turned down the offer to look for my way to KFM.
Even as KFM had not indicated that they were looking to hire a presenter, I came and asked for a voice test. I did not back down even when I heard that many other already-big media personalities like Mckenzie and Robin Kisti had done voice tests in the same period. I passed the tests, and for the following three to four months, came around pressing for an opportunity.

How did you come to present the late night love show, the K-Zone?
One day, after I had been at the station for about a year, my boss told me I was moving to the K-Zone. At first, I thought he was looking for a way to fire me by giving me a show I could not do. Then I thought of myself as this unromantic, loud girl who could not do a calm show whatsoever. I did not know it would be the show that would bring out a new side of me and grow me a big listener base.

Talking of the K-Zone, what great memory do you have when you look back at your time on the show?
Foremost would be the fact that the show gave me an opportunity to serve people – mending hearts and generally helping people with relationship issues. I helped people hook up and saw them get married, I helped salvage crumbling marriages, I helped people sort out cracking relationships, people brought me their children to name… generally I became part of a big family, where I was one of the heads. There is also the fact that it was the most popular late night show.

Have you found it challenging to cross from a love show to one with many issues to discuss?
I would say it started out challenging, but I have been at it for about five weeks now and I am settling in well. And it is exciting since this is the biggest show. The first challenge was having to leave the house at 4.30am, meaning I have to wake up at about 3.45am. But I have adjusted. I have also had to stop being very lovey-dovey and soft-spoken to become sharp, alert and full of life. On the morning show, we are setting for people the day’s pace.

There’s a public opinion that KFM’s morning show is presented by intelligent people since it discusses serious societal issues. How intelligent are you and how do you think you have blended into the show?
Well, the fact that my bosses sat down and thought of me as the right person for it says it all. I do not think they could ever put a douchebag on the show. And then, perhaps I also need to say that from my perspective, I think I bring to the show this lighter side of things, supplying a lot of fun, energy and reaching out to the simple, not-so-complicated people who perhaps previously found the show too hard on facts and too austere.

What are your plans for D’Mighty Breakfast?
Like I have already said, my biggest plan is to bring in that audience that has been missing because they thought the show was too complex. It could be that housewife who wants to hear people discuss issues around her without being too complex, or a young man who is not so educated but loves to have a good debate on society issues.

And you [as an individual], what are your plans for the future?
I hope to work on my music career and become a successful star both locally and internationally. Then, become a big-time public relations personnel and later join politics – with my speaking skills and concern for issues I think I will be useful in politics. I also plan to open a school for radio presenters to teach what media schools do not teach.

What issues particularly touch you as a person?
I feel passionately about art, especially music, health issues such as Hepatitis B, the need to have the not so elite people involved in discussions that shape their society; about women’s issues (though I’m no radical feminist), among others.

Born: Somewhere in the first years of the NRM regime.
Parents: Fred Deweyi (RIP) – who was a principal orthopaedic technician at Mulago Hospital, and Namusisi Deweyi – a housewife.
Education: Arya Primary School, Kololo and Stella Marris Primary School, Nsube. Taibah High School for O-Level and A-Levels. One Year Pursuing B.A. Procurement and Logistics Chain Management. UMCAT –Diploma in Journalism.
Marital Status: Engaged to Enock Nsubuga, a marketer (whom Jaq describes as very supportive in everything). No children yet. 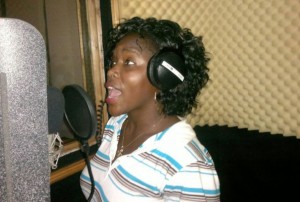 Most people don’t know a thing about your music. What music do you do?
I have been a musician since my childhood days, when I used to sing in school and church choirs and was a star performer in MDD competitions. But I only started recording music last year when I recorded my first track called Oukawamunabi.

What is that song about, and how many others have you released?
Oukawamunabi is in Lugisu and it translates to ‘Don’t lose hope.’ I wrote it while in secondary school after my father passed on and I was feeling so down, but I only recorded it last year after editing it to fit the current times –adding lyrics like those about the Bududa catastrophe. I have released two other songs and more are coming.

And under what genre would your music fall?
I think I blend many styles, but if I really need to categorise, I would classify it as secular music. I sing in my mother tongue (Lugisu), trying to incorporate the traditional Gisu sound as well as other sounds from around Uganda.

Do you play any instruments?
I am taking piano lessons and should soon be good at it.

You not recording in English or Luganda still has me confounded…
You see, I am a Mugisu who is proud of her roots and I want to offer the world some Gisu art, while on the other hand, I believe one should not do things just out of pressure to make quick sales. I do not say I will never sing in English or Luganda, but I have not decided to do so thus far yet. I want to grow my singing career on my own terms.

And the reason you chose to begin singing this later in your life…
I always wanted to start music after I had gotten somewhere, with a CV and some little money to support my career. You need money to do music, to record and promote and do everything else needed, and I knew that either I had to have money or I would easily be taken advantage of by people I would ask to promote me on their terms. So I waited and now, with help from my fiancé, I can promote myself.