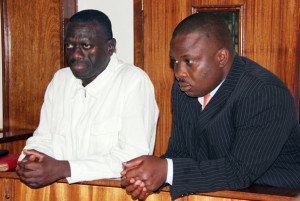 This is after Buganda Road Court Grade One Magistrate Julius Borore pushed the charges confirmed against the duo yesterday to the Constitutional Court for interpretation.

Yesterday the same magistrate upheld charges of unlawful society against Besigye and Lukwago saying the defense team had failed to prove that the charges were a nullity.

They argued that police had abused the constitution and detained their clients for over 48 hours in different cells, an act that is illegal.

The election of Sejusa's replacement is challenged in court

Suicide cases on the rise in Kitgum