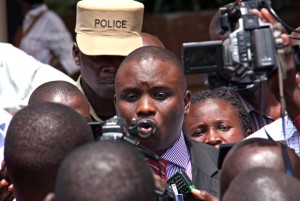 It is all jubilation for city lord mayor Erias Lukwago after the High Court halted the mayoral by-election.

Speaking shortly after the judgment was delivered by Justice Lydia Mugambe, Lukwago said he was ready to work with anyone who respects the law.

He says he will return to his office on Monday morning.

Meningitis vaccination on in Adjumani

Boost A Level education on Islands

Aid cuts will not affect tourism