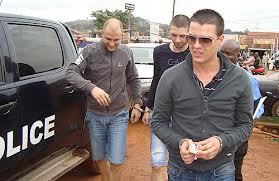 The Police have recovered more gadgets allegedly used by the Bulgarians suspected to have been involved in ATM robberies.

These were got from their residence in Naalya.

These include 2 machines used to copy ATM card numbers, screw drivers and drills among others.

The police spokesperson for Kampala Metropolitan Region Ibin Senkumbi says the suspects are not cooperating with the police and this is delaying the investigations.

They say they do not understand English and need an interpreter.

Senkumbi says the police is now working with Interpol to get the interpreters so the suspects can make statements.

The Police say they have discovered that these men were also implicated in neighboring Kenya over similar cases and were taken to court
and later acquitted.

The four men were arrested last week after they attempted to break into a Stanbic bank ATM machine in Natete.