Mournes looking at the casket containing the body of Mowzey Radio during the vigil in Makindye. PHOTO BY MICHAEL KAKUMIRIZI

The body of the late celebrated musician Moses Ssekibogo popularly known as Mowzey Radio is today to lay at Kololo Airstrip for public viewing instead of the National Theater as earlier communicated.

Mowzey Radio succumbed to post surgery complications at Case hospital yesterday where he had been admitted after sustaining serious injuries on his head following a brawl in a club in Entebbe. 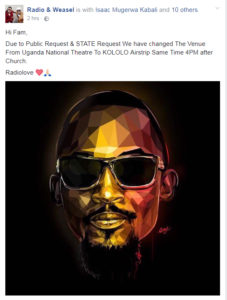 According to the funeral committee chairman music promoter Balaam Barugahara, a requiem mass in his honor is to be held at 2pm at Rubaga cathedral.

Many people including the President and fellow musicians have eulogized him describing him as arguably one of the most talented artists the country has had whose demise is a great loss to the music industry.

He shall be laid to rest on Saturday in Nakawuka.

Businessman Patrick Bitature alongside his companies; Simba properties Co. Ltd, Simba telecom among others, can be privately sued by Vantage Mezzanine Fund II partnership in a...

By Derrick Wandera The leader of the people’s Front for Transition Dr Kizza Besigye has this morning eluded security operatives at his home in Kasangati, Wakiso...

Jose and Weasle fight back tears during Requiem mass