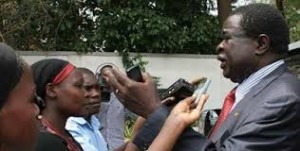 The late Hon William Okecho will be laid to rest on Thursday.

Okecho who was a former member of parliament for West Budama North County  passed on at Mulago hospital after suffering a stroke last evening.

NRM Chief whip Justine Lumumba Kasule says they are still consulting on when his body will lie in state at parliament.

She  describes the late as an honest and trustworthy man who cherished family values.

Okecho lost his seat in 2011 after the Constitutional Court ruled that candidates who contested on their political party tickets and lost cannot contest as Independents or on other party tickets.

However,  the Supreme Court recently overturned the ruling giving the affected legislators lee way to contest.