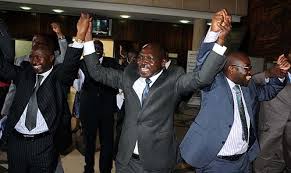 Three rebel NRM MPs have tasked President Yoweri Museveni to explain the source of funding of the party activities.

Recently, NRM legislators were given funds to popularize the party’s resolutions at Kyankwanzi, which included fronting Museveni as the sole flag bearer for the 2016 elections.

Addressing the media at Parliament today, MPs Theodore Ssekikubo, Wilfred Niwagaba and Barnabas Tinkasimire say the party does not have as much funds to spend on such activities hence need to declare the origin of the money.

However, the party maintains that the funds used for mobilization are contributions from their members.