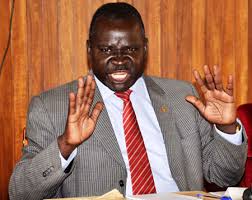 PAC members asking for provision of lunch by their committee have been silenced.

This follows a complaint from some of the MPs on the Public Accounts Committee over failure by the current committee leadership to provide food like was the case with the previous leadership.

However responding to the concerns, committee chairperson Kassiano Wadri said it was impossible to provide lunch for the members now because he has no budget for it.

Wadri also denied claims by some of the committee members that some particular individuals were favored for travels abroad. He said approval for travels both inland and abroad is based on members’ attendance and commitment to the committee work.

Earlier, Wadri scoffed at those attacking his committee over alleged nonperformance. He said in just two and a half years, it has been able to investigate a number of corruption cases and made recommendations which have led to the sacking of some Ministers among other reports.

Last week the speaker of parliament Rebecca Kadaga directed that all committee heads account for their time since they took office.