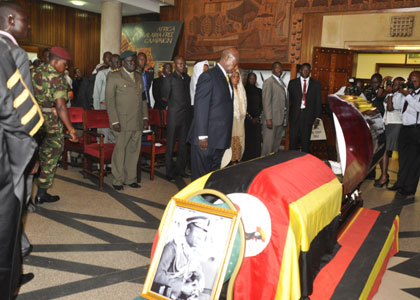 Former Vice President Gen Mustafa Adrisi should be remembered for his decency even when he served with a group of bad people.

These were the president’s remarks while paying tribute to the fallen leader.

President Museveni said that Mustafa did not like killing people and that’s why he became a target of the same regime under which he served.

Speaking during a special sitting to honor the deceased,  several MPs described him as an honest, committed, patriotic and peace loving man.

The motion in honor of Adrisi’s service and contribution towards the development of Uganda was moved by the Prime Minister Amama Mbabazi.

The Former vice president died on Sunday at Mulago Hospital at the age of 91 years.

It was supported by the 3rd Deputy Prime Minister Gen. Moses Ali and the opposition Chief Whip Winfred Kiiza.

Mbabazi said that Adrisi was strict, smart and patriotic, qualities every leader must have.