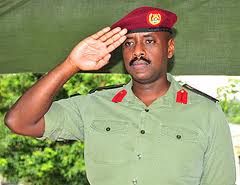 Several army officers were promoted to  higher ranks and some redeployed in a reshuffle announced recently.

Among these is Col. Muhoozi  Kainerugaba who was promoted to Brigadier becoming the first commander of the  Special Forces Command -SFC which has been expanded from a group.

Others are Col. Sabiiti Muzeeyi, Maj.Gen. Fred Mugisha who was formerly in  charge of AMISOM peace keeping group and now the new Joint Chief of Staff while
Brigadier Angina has been promoted to Maj Gen and appointed Chief of Staff Land
Forces.