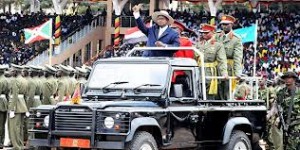 President Museveni has hailed the city executive director Jennifer Musisi for turning the city around.

He promised his continuous support to Kampala capital city authority and the people of Kampala.

President Museveni however asked the people of Kampala to think beyond political affiliations and rather focus at service delivery.

The president’s visit is in line with Musisi three years at the helm of affairs at the city governing body.

His visit however has left many road users stuck in traffic jam along almost all roads in the city.