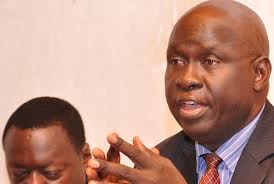 The leader of the opposition Wafula Ogutu has today named a new shadow cabinet and leaders of parliamentary accountability committee.

She will be deputized by Paul Mwiru. Kasiano Wadri moves to the Government Assurance Committee replacing Odonga Otto. Wadri is deputized by Isaiah Sasaga.

Abdul Katuntu has been maintained as the shadow Attorney General, Dr Lulume Bayiga remains the shadow minister for health.