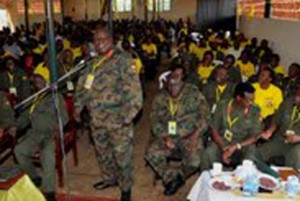 This comes after the caucus endorsed President Yoweri Museveni as the party flag bearer for the 2016 elections.

In a statement issued this evening, the caucus spokesperson Evelyn Anite says all other senior party leaders with presidential ambitions have been ordered to shelve them and collectively concentrate on supporting president Museveni.

She said looking for another flag bearer would cause disunity and breed divisions within the party.

The president said the book is expected to raise about half a billion shillings towards the movement house. 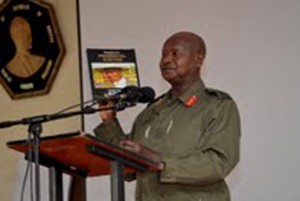 “In the last elections, I directed my staff to do some work in terms of documenting the campaigns. This is the result of that work. This book, I have been told will cost shs 100,000 per copy and there are 5000 copies. It will therefore raise about half a billion shillings towards the movement house,” the President said during an address to the NRM caucus members currently attending a retreat in Kyankwanzi NALI.

The book album was compiled, captioned and edited by the Deputy Press Secretary to the President Ms. Nabusayi Lindah Wamboka who was responsible for the assignment and was supervised by Brigadier Proscovia Nalweyiso, the Presidential Advisor on Security and defence.

DP to crack the whip on errant members