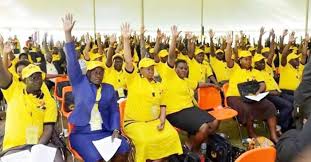 The NRM party electoral commission has warned aspiring candidates against any attempts to recruit election officials.

This comes ahead of the official launch of the party’s electoral roadmap expected on Monday next week.

The commission’s chairman Dr Tanga Odoi says it is only the party’s electoral commission that is mandated to recruit election officials at all levels.

He says the party will kick start its electoral cycle by conducting elections for special interest group committees at village level which will include representatives of persons with Disabilities, Older persons and the Youth.

Meanwhile other political parties have started identifying flag bearers for the special interest groups to beat the July 21st deadlind set by the Electoral Commission.

The Democratic Party vice president Mukasa Mbidde says they are conducting primary elections for all those who have expressed interest in these elections at the district level and will present candidates before the end of next week.

While the Forum for Democratic Change president Patrick Amuriat says they have instructed their chapters across the country to identify aspirants and forward lists to the party headquarters.