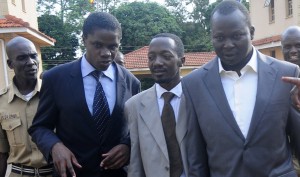 The wrangles that have plagued the NRM youth leadership are far from over.

A group of NRM youths has this morning stormed the party headquarters on Kyaddondo road in protest of the ongoing fights within the party.

The youth from different universities are calling for immediate action to  end the in fighting.

The group’s chairperson Milton Mugyema says they are also calling for the resignation of the youth national chairperson, Dennis Namara who they say has failed to manage the team.

The NRM Youth League has been entangled in fights with some supporting president Museveni while others are behind Amama Mbabazi for the party’s ticket for the 2016 presidential elections.

Earlier, a section of NRM youth leaders has re-affirmed its earlier position to support Prime Minister Amama Mbabazi as the party candidate for 2016.

The chairman Kampala district NRM youth league Adam Luzindana says all the efforts to reconcile the youth have so far not yielded any fruits.