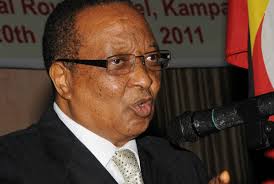 Appearing before the public service committee, Prof Nsibambi said he is yet to receive his official car and a house purchase fund of 240 million shillings.

He however says he is grateful that he received some of his benefits including 3.8 Million shillings per month for his pension, Fuel, Medical, utilities and domestic staff.

He further expressed his disappointment with the former Vice president Prof Gilbert Bukenya for insinuating that he had got all his benefits.