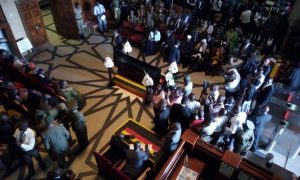 The body arrived at parliament at 10am for public viewing before a special sitting in the afternoon where legislators are to pay tribute.

Earlier yesterday the Prime Minister Dr Ruhakana Rugunda described the late as a selfless and a man who dedicated his service towards Uganda as nation and people.

According to the final burial arrangement the body will be taken to Gulu for prayers on Tuesday before it is taken to his ancestral home in Lamogi Sub-county Amuru district on Wednesday for burial.

Government to help it implement the national housing policy.

Uganda wins at the AFRIMA's in Lagos.