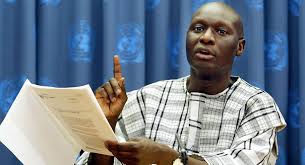 The defamation case against UPC president Dr. Olara Otunnu has been pushed to January 2015.

This is after Otunnu’s lawyer Francis Rugasira informed court that his client is out of the country on official party duties.

Prosecution says that on January 16th 2013, while at Uganda House during a press conference, Otunnu caused the publication of defamatory statements against President Yoweri Museveni.

It is alleged that in his speech Otunnu claimed that the government of Museveni is tainted with the blood of his former FRONASA comrade.