Online campaign to help Malaika meet Lukaku, Could it Happen?

For all that listen to D’Mighty breakfast this doesn’t come as news at all because they are aware of Malaika’s admiration of Lukaku. Almost every single day together, Brian Mulondo together with Sports presenter Patrick Kanyomozi have a banter about Lukaku and especially in cases where his team Manchester United are to play or have played a game.

To Malaika, Lukaku is a big deal, that her fans are now concerned. Malaika doesn’t end a day without talking about Lukaku. Oh, by the way, she refers to him as her boyfriend.

Romelu Menama Lukaku Bolingoli is a Belgian professional footballer who plays as a striker for English club Manchester United and the Belgium national team. A prolific goalscorer, he is considered to be one of the best strikers in the world.

He is also the 10th-most expensive Association Football transfer (€85 M, from Everton to Manchester United in 2017). 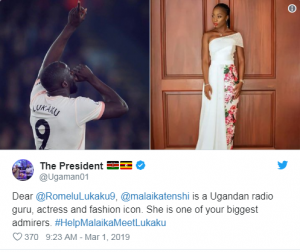 The self proclaimed President @Ugaman01 on twitter by writing who was recently hosted on the show kick started the campaign on twitter, “Dear @RomeluLukaku9, @malaikatenshi is a Ugandan radio guru, actress and fashion icon. She is one of your biggest admirers. #HelpMalaikaMeetLukaku.”

Other Ugandans on twitter are endorsing the petition and tagging Lukaku.

However, considering it’s a busy season with  Champion’s league, match after match and practice after practice, we hope Lukaku sees this.