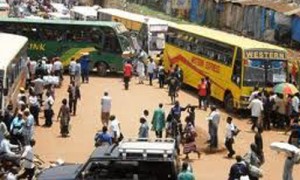 Transport along the western and northern routes has this morning been paralyzed by a strike by bus drivers.

Operators of 4 bus companies plying these routes are protesting the decision by the transport licensing board to suspend buses that get involved in accidents.

The affected bus companies include Allied and Kalita Bus Companies among others.

Early this week the transport licensing board suspended buses belonging to Kalita bus company from operating after one of their buses was involved in an accident.

This is the second incident since this year began were the transport licensing board is suspending buses after getting involved in accidents.

The bus owners however say that the transport licensing board should only suspend a particular bus that is involved in an accident and not the entire fleet.

They are now asking the ministry of works and transport to review the regulation, threatening not to resume operation until a common position is reached.

A group of bus Owners this morning is taking their petition to the minister of transport, to have their demands addressed.