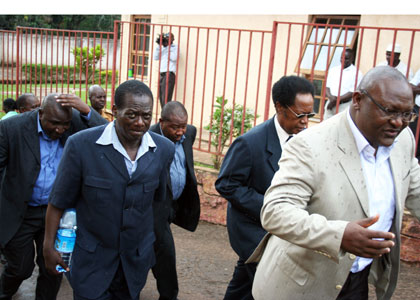 The nine pension scam suspects have been granted bail.

They have each been released on a 50 million shilling cash bail.

Their 31 sureties have been bonded 20bn shillings each not cash.

They appeared before the Anti -Corruption Court Grade One Magistrate who adjourned the case to March 1stfor mention.

This is after prosecution led by Lilian Omara told court that investigations were still going on.

Earlier, prosecution had objected to the bail application on grounds that LC letters presented by the sureties were invalid.

The said letters were dated between 11th September and 12th November.

However, the Magistrate said that there was no proof that these people had moved from their stated residence.

The suspects include Jimmy Rwamafa, the Permanent Secretary in the Ministry of Public Service, Kiwanuka Kunsa, the director research and development, Christopher Obeyi and David Oloka among others.

Lubega Francis, the ninth suspect who had been issued with criminal summons yesterday also appeared before court today and was charged.

They are all charged with abuse of office, causing financial loss, embezzlement and conspiracy to defraud.

It is alleged that the nine embezzled 165bn shillings and that Obey and Oluka embezzled over 173m shillings.

Another rights defenders’ office broken into