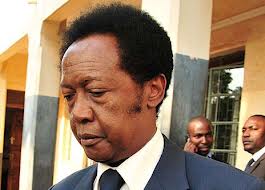 Nine suspects involved in the pension scam will spend some time in prison.

These have been remanded to Luzira prison until Thursday when they return for hearing f their bail application.

They appeared before anti-corruption magistrate, Sarah Langa and denied the charges.

They are Jimmy Lwamafa, the Permanent Secretary in the ministry of public service, Kiwanuka Kunsa, the Director Research and development, Christopher Obey, the principal Accountant, David Oloka, the Senior Accountant.

The charge sheet contains charges which include abuse of office, causing financial loss, embezzlement, and conspiracy to defraud.

It is alleged that the nine embezzled 165 billion shillings and that Obey and Oluka embezzled over 173 million.