The People Power Movement has dismissed as false a letter of apology making rounds on social media in relation to the death of a one Michael Alinda also known as Ziggy Wine.

The letter suggests that the statement by police regarding Ziggy Wine’s death is correct as opposed to the earlier kidnap reports. 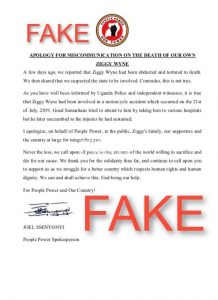 However the pressure group’s spokesperson Joel Ssenyonyi says the statement is fake.

Meanwhile, Ssenyonyi has confirmed that the Kyadondo East MP Robert Kyagulanyi is this afternoon expected in Luweero district to attend the burial of one of their supports who was allegedly knocked dead by a police truck.

Hakim Ssekamwa, a boda boda rider is alleged to have been knocked by the truck during a procession of People Power supports from Gulu court when the legislator and his co- accused were pressed with new charges.