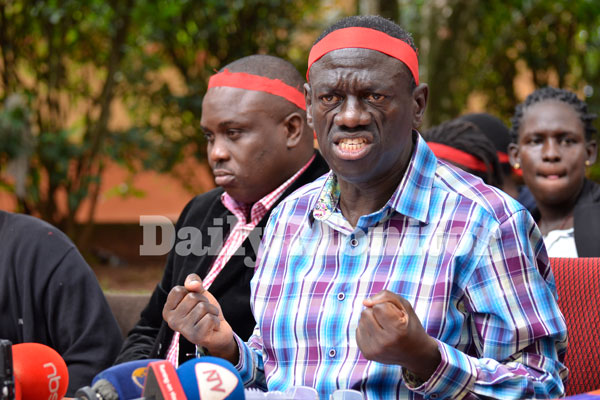 The leaders of the People’s Government – a political pressure group-have dragged the Electoral Commission to court over limiting days of voter registration.

Former Forum for Democratic Change (FDC) presidential candidate also leader of the outfit Dr.Kiiza Besigye says the suit also seeks to have the commission chairperson Justice Simon Byabakama step down because he has never resigned from his job as a Judge.

They also contend that the Secretary to the electoral commission Sam Rwakojo is supposed to serve a five-year term but has so far served longer than the period stipulated by the law.

Addressing a news conference earlier today, Dr. Besigye also said its illegal for the electoral commission to give only 21 days for people to register for the next general elections because the law requires that whoever clocks 18 years before the elections be registered to become an eligible voter.

He thus asks the Electoral Commission to make the registration of voters a continuous exercise.

Besigye says seeking a court for extension of the voters’ registration exercise, and also have the two leaders of the electoral commission resign because they are holding the offices illegally.

Boys 2 Men: Children are meant to be a result of a relationship and not the cause