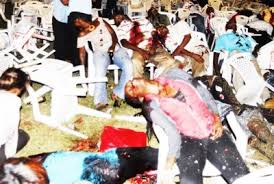 However the five constitutional court justices led by Steven Kavuma ruled that it is not against any law to extradite a suspect to the best place of trial.

The justices also said that Uganda had sought assistance from Tanzania and Kenyan authorities to help in arresting the suspects which was done.

They also say that the charges against the accused are grave and releasing them would be a threat to security regionally and internationally hence the need to keep them under detention.

Concerning the complaints raised by the suspects that they had been forced to sign confession statements, the judges asked them to table their concerns to the High court during trial

The suspects are charged with being behind the 2010 July bombings at Kyaddondo and Ethiopia Village restaurant that left over 70 people dead.

By Derrick WanderaNational Unity Platform (NUP) leader Robert Kyagulanyi, alias Bobi Wine, has said the dispute over the ownership of 640 acres of Magere land is...

Minister Kuteesa speaks out on relations with Rwanda

Minister’s statement on traders is blocked