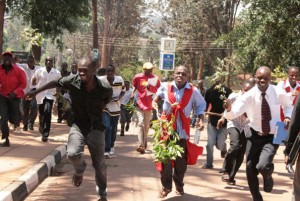 Business today came to a standstill at Makerere University as the police disperse students who were addressing a news conference.

The students had called the meeting to launch a parallel guild leadership accusing their current leaders of ignoring issues that concern them.

Dissatisfied with the current guild president over alleged failure to represent their interests, a group of Makerere University students have decided to form a “shadow” cabinet to raise their concerns and have them addressed.

Recently, the university announced a 10% tuition increment- a move that was not welcomed by the students. The students are now blaming their representatives for remaining silent on the matter.

The group’s leader, Boniface Mbabazi tells KFM that they have now decided to form what they call a shadow cabinet to raise their concerns and have them addressed.

Efforts to get a comment from the guild president have so far been futile.

The FDC Kampala Woman MP candidate Stella Nyanzi has revealed that angry Kenyans on social media have threatened to deport her if she does not ‘shut...

By Damali Mukhaye The Electoral Commission (EC) is seeking Shs5.8bn as payment in legal fees and compensation to candidates after losing election petitions. The request was...