by Ritah Kemigisa
in News
0

Police have intercepted a vehicle in Kireka and rescued two children from suspected kidnappers who had asked for three million shillings as ransom from their parents.

According to the children, the suspects tricked them into moving with them to buy some cakes and later disappeared with them without the consent of their parents.

The Bweyogerere Officer in charge Mike Mugabe says police managed to track the suspects who were making calls from Luzira and drove to Kireka when they realized police was trailing them.

Mugabe says police managed to intercept their car Toyota Hiace registration number UBB 274M at Kireka adding that the children were found in good  health and have since been reunited with their parents. 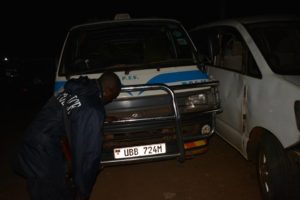 Mugabe adds that the car has been impounded and the suspects who are currently detained at Kira Division police station face charges of kidnap.