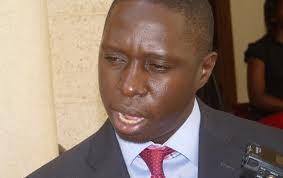 The Police have written to the speaker of parliament to grant them permission to summon the Kampala Member of Parliament Mohammed Nsereko for questioning on Thursday this week.

Nsereko is   implicated in a fraud case where 290 million shillings was reportedly lost from Crane Bank.

The spokesperson Kampala metropolitan police Ibin Ssenkumbi says that Nsereko is needed to help the police with its investigations.