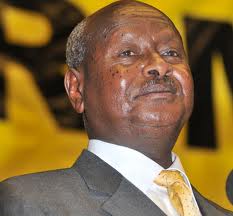 Giving his state of the nation address this afternoon  Museveni said that in order to compete favourably, there is need to ensure competitive prices and quality especially of all the crops like coffee, tea among other items produced.

He has cautioned relevant government agencies to ensure this is attained so as not to lose out on this market.

The president has also revealed that Uganda is in negotiations with Japan to procure earth moving equipment to aid large scale road works.

In his state of the nation address, president Yoweri Museveni says the equipment will be used water excavation for earth dams and bush clearing among others.

Meanwhile, he says agriculture grew by 1.5 % in the last financial year and has encouraged farmers to abandon subsistence farming and adopt commercial agriculture.

Earlier, while opening the 4th session, the Speaker of Parliament Rebecca Kadaga decried the delay by the government to address the proposed amendments to the electoral laws.

She says the delay is likely to affect the work of the Legislative arm of government.

She has urged the government to make submissions regarding the proposals early enough, to avoid what she called stampeding parliament.