President Yoweri Museveni has condemned in the strongest terms the killing of (the Assistant Inspector General of Police) Andrew Felix Kaweesi by thugs riding on motorcycles. 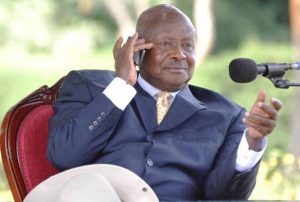 To curb the repeated murders in the city and other towns, the President has now directed the immediate installation of cameras in all major towns of Uganda and along the highways.

In a statement issued this afternoon, the president’s Press Secretary Linda Nabusayi, says the project had been delayed on account of other priorities like the roads and electricity.

The president has thus directed the Minister of Finance to work with Police to immediately close this gap.

Meanwhile, the security personnel and all citizens are asked to be vigilant and on the lookout for these assailants who have made it a habit to use motorcycles to kill people.

Senior prosecutor Joan Kagezi, Major Muhammad Kigundu and a number of Sheikhs have all been killed in the same manner.

The Uganda communications commission has warned media houses and those using social media against circulating gruesome pictures of the late Kaweesi.

The commission has noted with concern repeated broadcast and posting of pictures of the deceased in a manner which does not befit his caliber.

Now according to a letter signed by the commission’s executive director Godfrey Mutabazi, all media houses must stop use of such pictures which contradicts the mandate of media houses as par the Communications Act.

The Uganda Christian University has released a statement saying it is saddened to learn of the unfortunate death of police spokesperson Andrew Felix Kaweesi.

Kaweesi was one of the scheduled speakers at a UCU Finalist Career Seminar held in Mukono today.

The seminar which is held every semester brings together professionals to offer career tips to prepare finalists for life beyond the university.

According to the university communications and Marketing manager Michael Mubangizi, Kaweesi was due to speak at 10:00 am on the theme, “Career opportunities in the Armed forces and how to find them.”

He was to speak alongside the UPDF Spokesperson Brig. Richard Karemire and Frank Baine, the spokesperson Uganda Prisons Service.

The university has conveyed its sympathies to Kaweesi’s family, Uganda Police Force and the entire country.

The Electoral Commission has also eulogized the late Felix Kaweesi, praising his efforts in the 2016 elections.

The commission spokesperson Jotham Taremwa says Kaweesi was always available to be consulted for advice about security during the election period and responded swiftly.

Former Police Spokesperson Judith Nabakooba has asked security organs to mount a joint operation to crack down on the racket involved in the gruesome murder of prominent citizens in the country.

Hon Nabakooba also Woman Member of Parliament for Mityana District and chairs parliament’s committee on Defence and Internal Affairs was speaking to the media at the sidelines of parliament’s tribute to former Toroma County MP the late Cyrus Amodoi.

The late Andrew Felix Kaweesi has been described as a great states man who was always passionate on law enforcement.

Speaking to media today, Col Felix Kulaigye one of the UPDF representatives in Parliament said that Kaweesi’s murder cannot be treated lightly and thorough investigations must be conducted to apprehend culprits.

Meanwhile human rights activists are saying these numerous murders are an indication that government has failed to protect Ugandans.

Speaking to KFM, the Executive director of foundation for human rights initiative Dr. Livingston Ssewanyana says the government has a responsibility of protecting its citizens against such violence.

PM calls for a thorough investigation into the murder of Felix Kaweesi.

PM calls for a thorough investigation into the murder of Felix Kaweesi.

Kaweesi To Be Laid To Rest On Tuesday