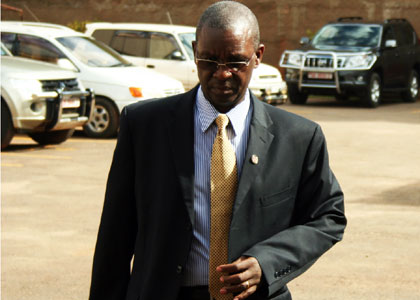 The Permanent Secretary in the office of the prime minister Pius Bigirimana insists that he was only a whistle blower in the case of alleged mismanagement of public funds.

Bigirimana is currently appearing before parliament’s committee on public accounts to present his defense on allegations of involvement in the mismanagement of over 38 bn shillings of donor money.

The said funds were meant for the peace, recovery and development program.

Bigirimana has told the MPs that he noticed Kazinda’s conduct in 2010 and notified the accountant general but no action was taken.

He also accuses the accountant general of frustrating his efforts to have Kazinda transferred.

In his report a copy of which was submitted to the committee, Bwoch said he tried to have Kazinda transferred but his efforts were blocked by the Prime minister and Permanent Secretary.

In his submission, Bigirimana has also pointed an accusing finger at the internal auditor Shaban Wejura saying he failed to furnish him with the relevant reports on the matter, a fact that is disputed by the MPs.

The MPs however say they have proof of receipt of the said reports by Bigirimana.

He also accuses Wejuri of taking bribes from fellow workers, a claim that is yet to be independently verified.

The committee chaired by Paul Mwiru has now asked Bigirimana to speak under oath after he made what they regard inconsistent statements.

Bigirimana was meant to appear together with the former principle accountant Godfrey Kazinda, however the latter is yet to show up at parliament.