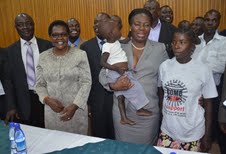 The fight against the Lord’s Resistance Army in Central African Republic has been complicated due to its support from key armed rebel groups in the country.

According to a joint security sector reform assessment mission, the relationship between the LRA and ex-Seleka rebels has further complicated the operation of the Au-led regional force in some key LRA affected areas.

The head of the African-led International Support Mission to the Central African Republic, Gen. Jean Marie Mokoko, says there are also reports indicating that ex-Seleka fighters are involved in trading with LRA in illegally sourced diamonds and ivory.

Gen. Mokoko says though the group is estimated to have 250 combatants and have been terrorizing local populations, with the latest reports from the UN showing 65 presumed LRA attacks were perpetrated during the first quarter of 2014, which resulted in 93 abductions and two deaths.