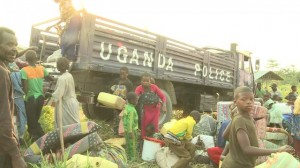 Government today marks the World Refugee Day with a call on refugees to be law abiding.

According to the Commissioner Refugees in Office of the Prime Minister David Kazungu, government will not tolerate refugees who do not respect the laws of the land. ” Refugees are not above the law”, he says.

The UN High Commission for Refugees has raised the red flag over the increasing numbers of South Sudan refugees.

Despite the reported relative peace in South Sudan, more refugees are said to be crossing into Uganda.

Now as the country marks the world refugee day today, the Assistant Representative for protection at the UNHCR Esther Kiragu says they receive about 150 refugees daily.

National celebrations to mark the World Refugee day are being held at Kyangwale refugee settlement camp in Hoima district.

The UN refugee agency says the number of people forced to flee their homes because of war or persecution exceeded 50 million in 2013, the first time since World War Two.

Accord to a UNHCR report,  the overall figure of 51.2 million is six million higher than the year before.

Antonio Guterres, head of the UNHCR, says the rise was a “dramatic challenge” for aid organisations.

Another Muslim cleric is killed by a mob