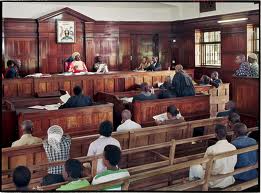 This is done to limit any trace of corruption in case of prosecution.

The report attributes this to lack of awareness among the public on their democratic and legal rights.

A four months survey carried out in Kasangati, Matugga and Mukono magistrates’ courts among others shows that corruption is still a problem at the lower courts and a huge dent on the image of the judiciary.

Executive director of the anti-corruption coalition Uganda, Cissy Kagaba says the judiciary should keep its eyes on lower courts to aggressively deal with the problem instead of being reactionary.

Responding to the findings, deputy Judiciary spokesman Araali Muhirwe has admitted that there is a problem but blames it on the huge case backlog

He however says they have taken action citing an example of Nakawa court where officials implicated in a corruption scam were all fired.