This follows a meeting held with his successor Patrick Amuriat to discuss findings from his recent consultative meetings across the country. 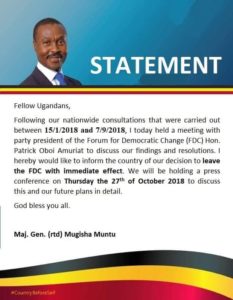 In a statement released this afternoon, Gen Mugisha has said following the meeting the meeting with party president, they have decided to leave the FDC with immediate effect with a press conference to be held on Thursday to announce the way forward.

Muntu speaking to Journalists has apologized to party president Patrick Amuriat for the careless, premature release of his statement quitting the party & says he will communicate officially in the next one or 2 hours