A former president of the African Court on Human and Peoples’ Rights (AfCHPR) has allayed fears that Rwanda’s withdrawal of its declaration would have a significant impact on future ratifications.

On February 29th, Rwanda withdrew its declaration that allows citizens to take cases of human rights violation to the African Court, sending a wave of uncertainty among human rights activists in many African Union member states including Uganda.

Rwanda made the withdrawal communication on February 29, three years after it first deposited the declaration under Article 34(6) of the Protocol to the African Charter on Humna and Peoples’ Rights.

In its withdrawal communication the Rwandan government said it was preventing exploitation of the individual complaint procedure by criminals, particularly individuals who took part in the 1994 genocide and have subsequently fled the country.

However, speaking at an inter-regional dialogue organised by UNESCO and the African Court on Human and Peapoles’ Rights on 10 September in Arusha, Tanzania, Justice Gerald Niyungeko said the move would not have any legal impact on the pending cases. “For now Rwandese can still file their cases. Ratification or withdrawal is the decision of an individual state, he added. 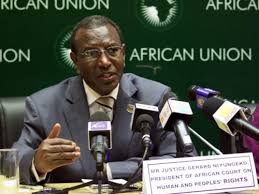 Justice Niyungeko added though, that politically, the decision sends a negative message for the states that are yet to ratify the protocol and those that have ratified but have not yet deposited their declarations like Uganda.

“Rwanda’s withdrawal will come into effect one year after pulling out”, Justice Niyungeko told fellow judges, senior journalists and lawyers drawn from across Africa.

Out of the 54 AU member states 30 have ratified the Protocol and only eight have submitted declarations allowing individual complaints to the Court, and Rwanda is the first State to withdraw, potentially reducing the number of AU countries where individuals and NGOs have direct access to the Court to seven.

The Arusha meeting also focused on strengthening strategies to increase the number of African countries ratifying the Protocol and depositing the Declaration that allows citizens to present their cases to the African Court.

The Seminar conducted between September 8th -10th was running under the theme; “Strengthening Judicial Systems and African Courts to protect safety of journalists and end impunity”.