In her ruling, Jinja High Court Judge Eva Luswasta says having a fixed place of aboard is one of the key reuirement for bail and Mumbere has two fixed places of aboard in Muyenga a Kampala suburb and in Kasese.

He has been released on a non cash bail Shs5m and his sureties Shs100m each. 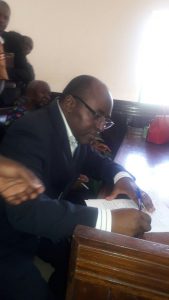 Mumbere presented 6 sureties including 5 Members of Parliament from his region led by the Leader of Opposition Winnie Kiiza and his former premier Constantine Bwambale.

Earlier, a team of state attorney’s from the Directorate of Public Prosecutions led by Alex Ojok had objected to Mumbere’s bail application on grounds that being an influential person in the Rwenziori sub region, he had capacity to interfere with and frustrate the on-going police investigations within the area.

Now the judge has prohibited him from travelling to Kasese, Kbarole and Bundibugyo.

Manchester United have the most visited club website in the world

Baby suckling its dead mother in a bush

Mumbere rearrested shortly after he was granted bail