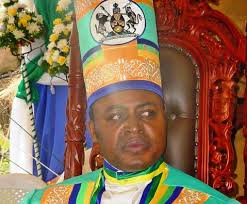 The police have refuted reports of the arrest of the Rwezururu King Charles Wesley Mumbere.

In a statement issued this afternoon, the deputy police spokesperson Polly Namaye says that police has not under any circumstance attempted to summon or arrest the king.

She however does not rule out the possibility of summoning the king in connection with the recent attacks on the Rwenzori region that claimed over 90 people.

She adds though, that the kingdom Prime Minister Noah Nzaghale, and two other kingdom officials are still under police custody.

Addressing the media yesterday, the Omusinga said government was chasing the wrong enemy and vowed to protect his Kingdom as a professional soldier.

The speaker of parliament Anita Among has denied ever meeting and giving out shs 40m to Bukoto South MP Twaha Kagabo as an alleged bribe for...

The Minister of justice and constitutional affairs, Norbert Mao, has challenged Civil Society Organizations in Uganda to continue pursuing for civic space. He made the remarks...

Bukoto south MP Twaha Kagabo has this morning returned shs 40m quietly received as a sweetener for the approval of a shs 618bn supplementary...

Police have vowed to name and shame traffic offenders every week, a plan a lawyer says is illegal. Ms Faridah Nampiima, the traffic police spokesperson, said...

BY AFP Former US president Donald Trump said Monday that his Mar-A-Lago residence in Florida was being "raided" by FBI agents in what he called an act of...