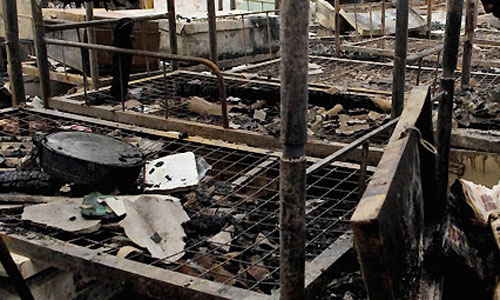 2 people have been arrested over the fire that gutted dormitories at St. Leo’s Junior Academy in Nyendo, with at least 5 pupils feared dead.

The fire whose cause is still unknown broke out at about 4.00am this morning and burnt down 2 domitories.

Those arrested include the Head teacher Elly Kiyingi and the school’s director Sserwanga Ssengobi.

The Police Commander Southern Region Simon Wafana accuses the school administrators of failing to inform the police about the fire in time.

He says the school administrators spent about 2two hours fighting the fire which razed the dormitories before informing the police.

The two dormitories named Constance and Damiano, which were affected, housed pupils from the Nursery section up to Primary Four.

The remains of the pupils have been taken to Masaka Referral Hospital where the government chemist is awaited to help in identification of the victims.

Reports also indicate that one of the parents who were rushing to the school was involved in a car accident in Masaka Town.

Inquiries into the possible cause of the fire are still ongoing.

Over 3000 people at risk in Bududa