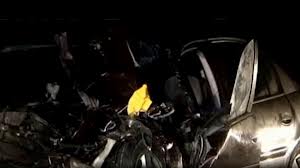 Five  children have perished a fatal accident that occurred last evening in Kayunga.

According to the area police spokesperson Lameck Kigozi, the accident occurred along Kayunga -Bbale road at around midnight.

Kigozi says that preliminary investigation indicate that the truck driver lost control and rammed into a group of children that was trekking to the venue of the Kabaka’s visit.

He adds that investigations continue to establish the real cause of the accident as the hunt for the truck driver also continues.

In a seperate development, one person has ben killed in hit and run accident in Masaka district.

The accident occured last night at Bukunda Trading center along the Masaka-Kyotera highway when a speeding vehicle knocked dead a man who was crossing the road.

The deceased has been identified as Godfrey Kalema a resident of Taala Village in Masaka district.

The Southern Region Traffic Police Commander Joel Khasule Ogwal has attributed the accident to over speeding and reckless driving by the driver of the vehicle who disappeared after the accident.

He says that the deceased’s body has been taken to Masaka referral hospital for postmortem as investigations into the cause of the accident continue.