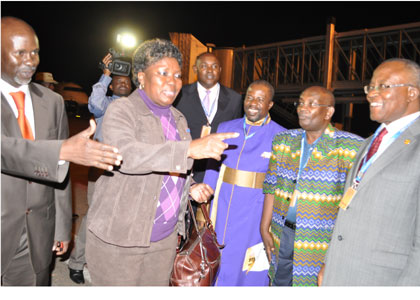 The Speaker of Parliament Rebecca Kadaga has criticized the western world for trying to force developing countries like Uganda to accept homosexuality in exchange for aid.

Speaking shortly after arriving from the Inter Parliamentary Union Summit in Quebec, Canada last
night, Kadaga said that Canada and other western countries can keep their aid
if it is attached to promoting acts that are contrary to the country’s beliefs.

This comes after Kadaga criticized the Canadian Foreign Minister John Baird for attacking Uganda over its position on homosexuality and lesbianism at the just concluded IPU summit.

The Speaker says it is time for African leaders to overcome the slave mentality and decide their own destiny.

She called upon the Parliamentary Legal Affairs Committee to table the report on the anti-homosexuality bill to start debate on the matter.

A group of religious leaders who received the Speaker led by Pastor Joshua Lwere urged other leaders to follow the Speaker’s good example in the fight against homosexuality.